I posted an article earlier today on my Facebook page the top 5 things clinicians can commonly forget about in post-op ACL rehab by Dennis Treubig on The Manual Therapist’s website. One of the points listed was restoring tibial internal rotation.

When a tibia lacks the ability to internal rotate on the femur it can often result in the tibiofemoral joint sitting in an externally rotated position. When this occurs the ankle/foot will come along for the ride into supination. Because we as humans don’t want to walk on the outside of our foot, something needs to compensate in order to get the foot flat on the ground. In order to make this happen the tibia will move outwards to place that supinated foot flat on the ground. This outward motion of the tibia will result in genu valgus at the knee. Or in lay terms….shitty knee position. This position could contribute in medial knee pain due to to the inner structures of your knee getting over torqued, lateral knee pain due to the outer structures getting tight, or hip and foot pathologies as discussed later. 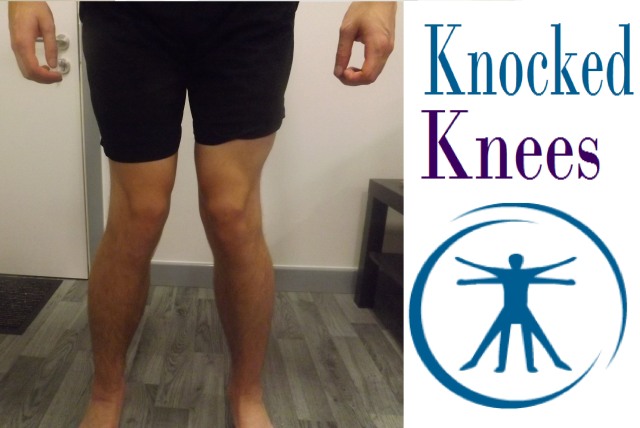 We can see in the image above how an externally rotated tibia relative to a femur can result in genu valgus on the individual’s right knee. If the tibia was to be aligned more vertically under the femur then the individuals foot would be supinated on the floor rather than the comfortable flat position it is in now. So the tibia moves outwards to place the foot flat on the ground resulting in an excessive genu valgus at the knee.

2. Compensation at the hip:

When the tibia is set into a position of external rotation/genu valgus as discussed previously it is going to result in the hip constantly falling into a state of hip internal rotation (as seen in the picture above as well). This could result in Femoroacetabular impingement symptoms, labral issues, eventual joint wear and tear (OA), but most importantly it is going to create a dysfunctional hip joint that won’t allow the gluteal musculature to properly function which can be tied to many different pathologies.

Genu Valgus is not always just pure weakness of the hip. In many cases it is, especially with untrained individuals but if someone has a stubborn valgus and are doing all the strengthening in the world already you may have to dig deeper. Perhaps the lack of tibial IR is not allowing them to fully access their hip ER and the ability to use their glutes to do so. If you can free up this motion at their knee (and likely below as well, subtalar/distal tib-fib, midfoot) then a patients ability to access their posterior hip musculature becomes a lot greater. Using strengthening to correct a valgus is very important, but you need to make sure the mobility foundation is set first. If the motion at the knee is not restored and then the individual used hip ER in a squat, deadlift, or single leg stance to create stability then they would likely have to lose full contact with their foot via the medial side of the foot raising off the floor during these motions which could result in some of the issues below.

Lets say that the lack of tibial IR talked about above doesn’t result in a genu valgus at the knee and hip IR. This would only happen if the foot position did not correct itself to become flat with the level ground. This would mean that we are walking around with a foot/ankle complex locked in supination. This is not an ideal situation either because it could result in a few different things.

The body could stay uncompensated and excessive weight could be placed through the lateral aspect of the foot that could result in stress fractures or pain on the lateral side of the ankle. The ankle may compensate by then collapsing excessively collapsing into pronation to over correct the starting point of excessive supination. Aka plantar fasciitis or tibialis posterior tendonitis waiting to happen.

I hope to post a video later this week or next week of a few different ways you can assess tibial IR, along with some different treatment options and home exercise options as well.

← If you could pick one exercise….
The Problem with an Unwritten Physio Rule…. →